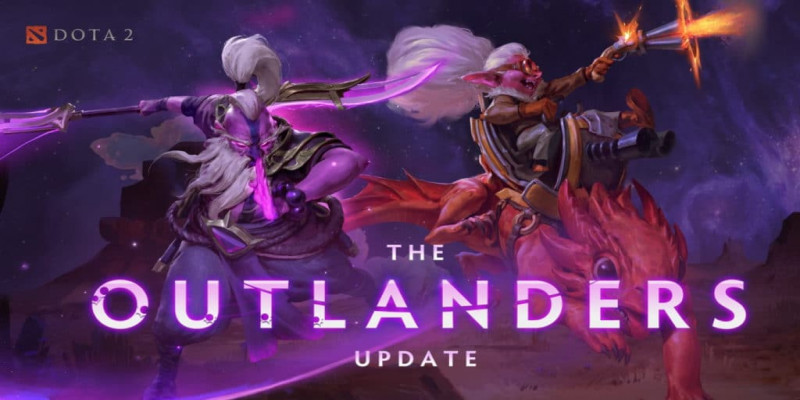 Good news for all Dota 2 fans! A new update for this incredible game has finally arrived! Among the changes, there are two new heroes, plenty of small changes to existing items and a massive map re-work. Moreover, this patch of updates is the biggest one since the 7.0 release in 2016. Interested in knowing more? In this article, we will share with you everything we know.

The most noticeable addition of Outlanders is two new heroes: Void Spirit and Snapfire. Let’s look at them closer.

The first one is Void Spirit. He joins the team that consists of Storm Spirit, Ember Spirit, and Earth Spirit. Initially, he was introduced on The International’s stage in Shanghai. The developers from Valve showed some of the abilities the hero will have. But for now, they reveal all the secrets. So, the full kit of Void Spirit is the following:

Another hero introduced on The International was Snapfire. She looks like an old lady with a gun. A set of abilities of this hero is the following:

We highly advise you to watch more about these characters because they definitely change the game.

Another great change in the Outlanders update is a fully maps rework. The developers rebuilt the layout and delete the side shop. It means that all the items from the secret shop are now exclusive only to this kind of shop. At the same time, secret shops were replaced with outspots. Each of them activates at the 10-minute mark. If you want to gain control over one of the shops, you need to complete a six-second channel. The question remains only why do you need it. The answer is very simple: each control is the additional bonus.

So, now we looked at two of the most important updates: two new heroes and map rework. But it doesn’t mean that it is an end. A lot of changes were made to the courier system. But the most important is that starting from this release each player can have their own courier. Moreover, it will level up and improve along with them. For example, the couriers will gain some increases to their speed, health, and so on. These changes are the causes of changes in the game’s economy. Some of them:

Dota 2: Some Facts And General Gameplay

Dota 2 is a massively multiplayer online battle arena (MOBA) game released in 2013 for the three platforms: Microsoft Windows, Linux, and OS X. The game was developed and published by Valve Corporation and is a sequel to Defense of the Ancients (DotA). As we mentioned above, Dota 2 is a multiplayer game where 10 people divide into two teams with up to five players. They have to occupy and defend their own bases which are marked on the map.

At the beginning of the game, the players can choose the character they want to play — a ‘hero’. Each of them is very powerful and has a set of unique abilities. After the start of the game, players collect various items and experience points that can help them to defeat against opponent’s team. The winner is the team that destroys all the enemies first.

Dota 2 is well-known on the e-sport scene. Every year teams from different parts of the world participate in various tournaments to win the prize. The most important is The International tournament. The money prize is upwards of $30 million. This fact makes Dota 2 the most lucrative game in esports.

Does Outlanders Change The Game?

Of course, yes. This update brings the changes almost to all spheres of Dota 2. First of all, now you can choose two new heroes to play: Void Spirit and Snapfire. Each of them has a unique set of incredible abilities. Moreover, the changes to maps and courier systems shape the economy inside the gameplay. If you want to know more about these updates, we highly recommend you to go to the official Dota 2 site. The developers described in detail all the changes and new features. Also, there you can watch small videos and see all the changes in your eyes. Share with us in the comments below whether you are excited about Outlanders or no? If yes, what do you like the most? If no, what are the reasons? Why do you not like Outlanders?